Recently we found out that my husband, Greg, would be getting a promotion and we would be relocating from Tampa to Miami. Well, he had their poor office coordinator scanning the calls from the moving companies he was getting estimates from. Greg told her he would make it up to her by buying her snacks from the vending machine the rest of the week. Men!! When he told me this I quickly volunteered to make her a homemade treat instead. Not really knowing what she liked, except for chocolate, I began going through my recipes. I came across Double Chocolate Brownie Cookies in my Martha Stewart Baking Handbook. I had already made one successful cookie from her book so why not try another.

I went through the whole process of following the recipe exactly. After getting all of my ingredients combined I had a nice semi-thick batter. The only problem was….the recipe said to take spoonfuls and roll them into balls. If I took what I had and did that I would have had a big blob of batter in my hand and there was no way it was going to roll into a ball. I went back and re-read the recipe to be SURE that I did everything correctly and that it didn’t say to let the batter stand or refrigerate. I did everything right and there was nothing that said to do anything more with the batter after it was all combined. Hmmmm….now what?

I was very pleased to see that they turned out fine. They were delicious (very decadent) and had that nice soft consistency of a brownie, YUM! In the end I had a success and everyone at Greg’s work loved them! They wanted me to make more over the weekend for Monday, lol. 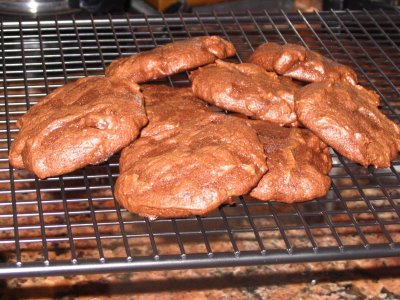 Preheat your oven to 375 degrees. Line two large baking sheets with parchment paper and then set aside. In a heatproof bowl set over (but not touching) simmering water, melt 5 ounces of the semisweet chocolate, all of the unsweetened chocolate and the butter. Stir until smooth. Set mixture aside to cool for about 5 minutes.

In the bowl of an electric mixer fitted with the paddle attachment, beat the chocolate mixture and sugar on medium speed until well combined, about 3 minutes, scraping down the sides of the bowl as needed. Add the eggs and mix until completely combined. Beat in the vanilla. Add the flour and salt, and beat until just incorporated. Stir in the remaining 4 ounces of semi-sweet chocolate and the nuts, if using.

Shape 2 tablespoons of dough at a time into 1 1/2 inch balls and place about 1 1/2 inches apart on the prepared baking sheets. Bake, rotating sheets halfway through, until edges are set and centers are still a bit soft, 9 to 11 minutes. Transfer parchment and cookies to a wire rack to cool completely.

Note: I used a hand mixer which may be why the consistency didn’t turn out the way it should have.

4 thoughts on “Is it a brownie or a cookie? Who Cares!”