I found this recipe while flipping through the October 2008 edition of Cooking Light.  It sounded almost too decadent to be considered a “light” recipe…what more could you ask for?  I decided to try it out while my mom came to stay with us for a weekend.  Of course it is a risotto so it was a bit time consuming, but in the end it was worth the time spent.  It sounded decadent and it was decadent, but without the guilt of the high calories of course.  I also usually adapt recipes to mine or my husbands liking, but this one was great just the way it was.

If you aren’t in a hurry and you are looking for a recipe that looks like it was a lot harder to make than it actually was, then I would definitely recommend this seafood risotto.  It also doesn’t hurt that it is very colorful and pleasing to the eye. 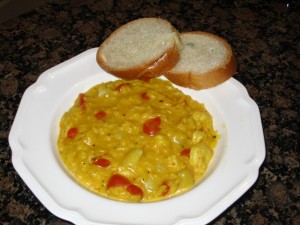 Bring broth and clam juice to a simmer in a medium sauce pan (do not boil).  Keep warm over low-heat.