Rachael Ray, you either love her or you hate her. I just so happen to love her. I will admit that I am not always a fan of her recipes, as they can be a bit out there. I guess I should say that Greg isn’t always a big fan, since he can be somewhat of a picky eater at times. Her combinations can be a bit too much for him. I still love getting ideas from her and I love her magazine. I feel that although I don’t always use her recipes religiously, she inspires me to think outside of the box.

We hosted a birthday dinner for my dad back in December. I had actually never had anyone from my dad’s side of the family, including him and my stepmom, over for dinner before. I know it sounds strange, but this is the first time we have lived close to them since I graduated college back in 2005. So, I really wanted to wow them. I am pleased to say that Greg and I did just that! They didn’t stop talking about that dinner for weeks. I made a few more time consuming appetizers, so I was looking for another one that was simple. While flipping through the December issue of Everyday with Rachael Ray I found a section of little finger sandwiches. This Pesto-Prosciutto Sandwich was one that was mentioned. It sounded like a winner, tasty and simple. That it was! 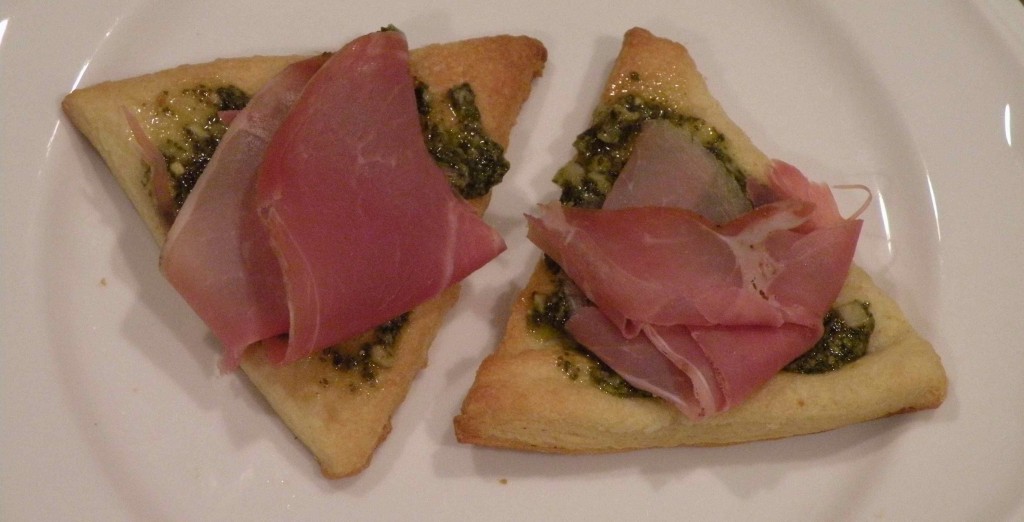 Thaw dough if necessary and then roll out. Cut into the desired shape. Mine were more of a triangle since I used crescent roll dough. Bake in a 400 degree oven until golden brown. Let cool and then split (if necessary). Spread the bottoms with store bought pesto, top with prosciutto slices and cover with pastry tops if desired.  I chose to keep mine open faced.