It’s no secret that I love baked goods. If I could eat a fresh muffin, scone, pastry, etc. for breakfast everyday I would. Unfortunately if I did this then I would probably have to spend the other half of everyday in the gym. So every once in a while I try to come to a compromise; make something yummy but do it on the healthy side. That is where these Morning Glory muffins come in.

When I saw these muffins I knew they would be the perfect “compromise” to my regular breakfast of egg whites and fruit. They would be a nice fresh baked muffin filled with fruit, yogurt, oats and loads of other good for you stuff. So I gathered my ingredients and got to work.

These were definitely tasty muffins; they were flavorful and had more of a dense consistency to them. I must admit that the Honey Bran Muffins are still at the top of my list for healthful muffins though. Not to say the Morning Glories weren’t good, because they were, I think I just prefer a more cake-like texture to my muffins. Overall I recommend these and I think it is a great base recipe to tweak to your liking. It is also a great way to use up ripe bananas.

Oh, and if you are wondering why they look a little weird in the shape department, it’s because I used my silicone baking cups that have a flower-like edge on them.  The pictures don’t do them much justice and kind of make them look like blobs. 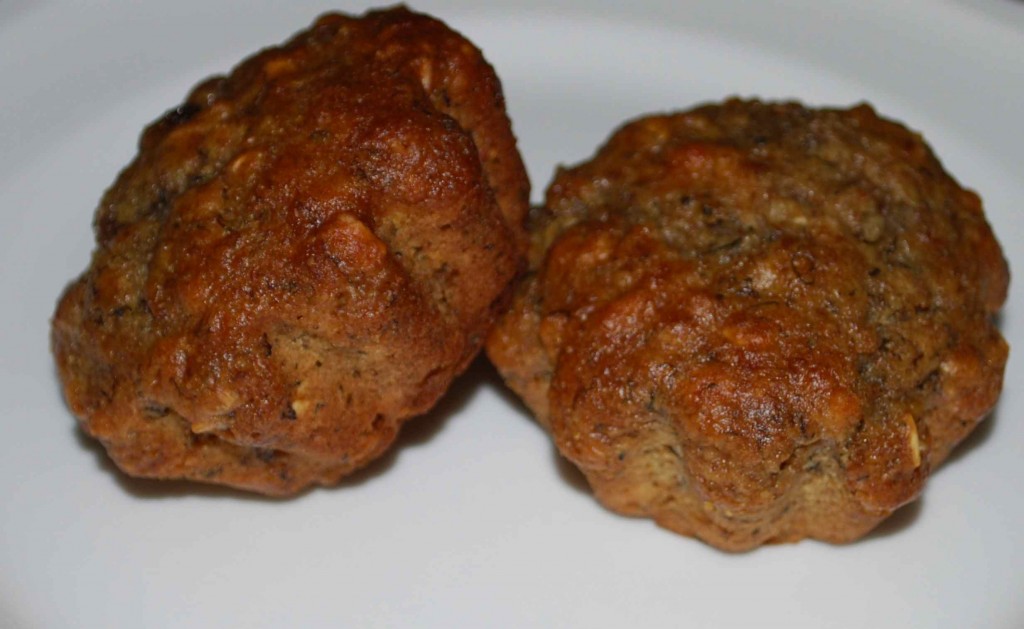 Place 18 muffin cup liners in muffin cups; coat liners with cooking spray.
Lightly spoon flours into dry measuring cups, and level with a knife. Combine flours and next 5 ingredients (through salt) in a large bowl; stir with a whisk. Make a well in center of mixture. Combine yogurt, banana, and egg; add to flour mixture, stirring just until moist. Fold in raisins.

Spoon batter into prepared muffin cups. Bake at 350° for 20 minutes or until muffins spring back when touched lightly in center. Remove muffins from pans immediately; cool on a wire rack.

As someone who grew up being taught that it was very important to eat breakfast every morning, it was strange to me that Greg doesn’t eat breakfast. He likes eggs, bagels, cereal…you know, most of the basic breakfast foods; he just doesn’t like to eat in the morning. Well, after spending nine years with him I learned that he doesn’t mind breakfast as long as he can have it later in the morning, around 9 or 10. Of course with work and all it isn’t always convenient to eat at that time, so I try to think of ways for him to have something quick or on the go. So far cereal has been a staple and now muffins have been thrown into the mix. Luckily he enjoys healthy muffins over the sugary ones, so that works out well.

We have been trying to find a great raisin bran muffin recipe, since that is his favorite combination; so when I saw that the Tasty Tools event for April at Joelen’s Culinary Adventures was muffin pans I thought it would be a perfect time to experiment. When we bought the wheat bran for the last recipe we tried, the package also had a recipe on it. I told Greg we would try that one next time. Sometimes I am weary of the package recipes, but this one had healthy ingredients and sounded pretty promising.

After pulling up a “to do” list and seeing the Tasty Tools event on it with the entry date drawing near I realized that Greg also needed breakfast so I had better get to work on those muffins I promised him. I am very happy that he convinced me to use that recipe because the muffins came out wonderful! They were moist and had a great texture. I was worried they may be a bit bland since the only form of sweetener in them was honey and I used unsweetened applesauce, but to my surprise they were plenty sweet enough. I have a feeling that these may be a new favorite staple for Greg’s breakfast. 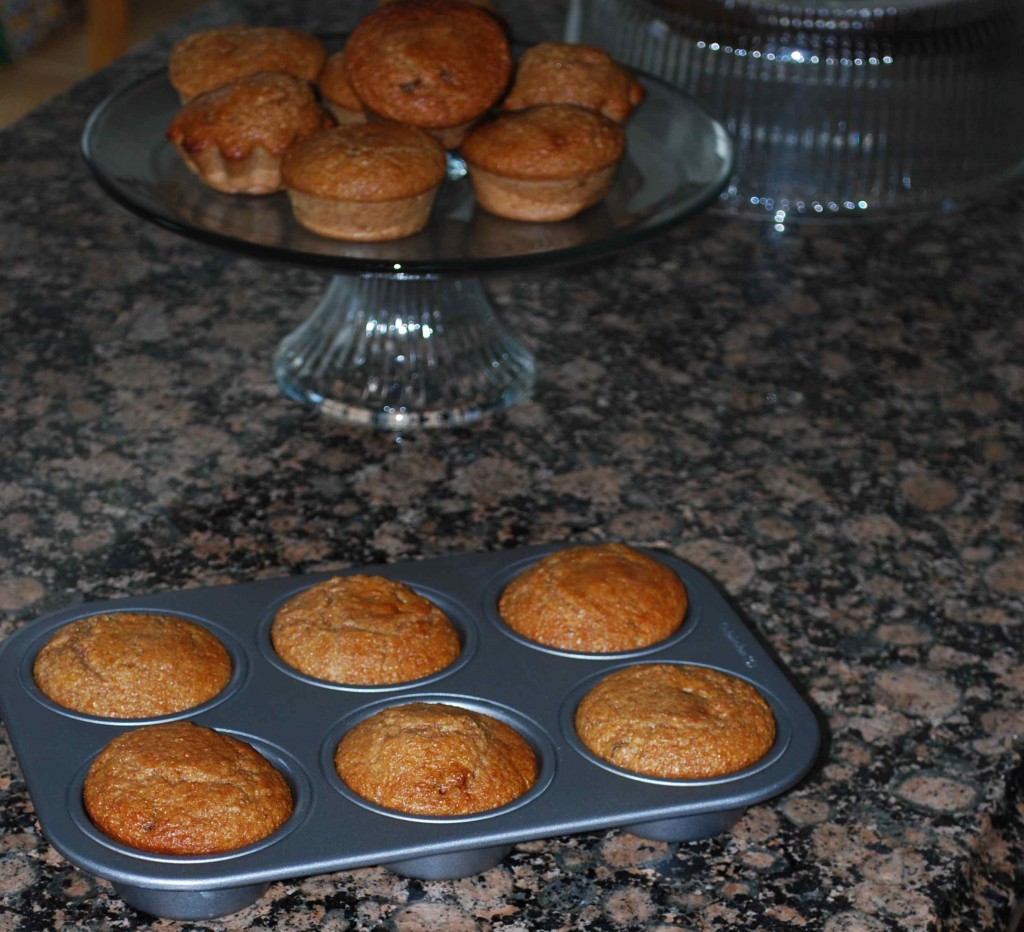 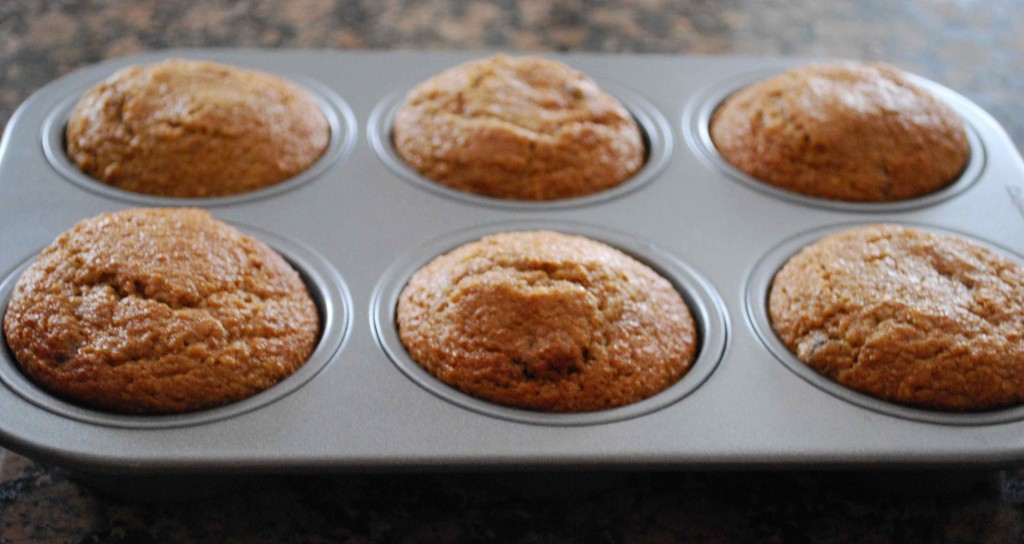 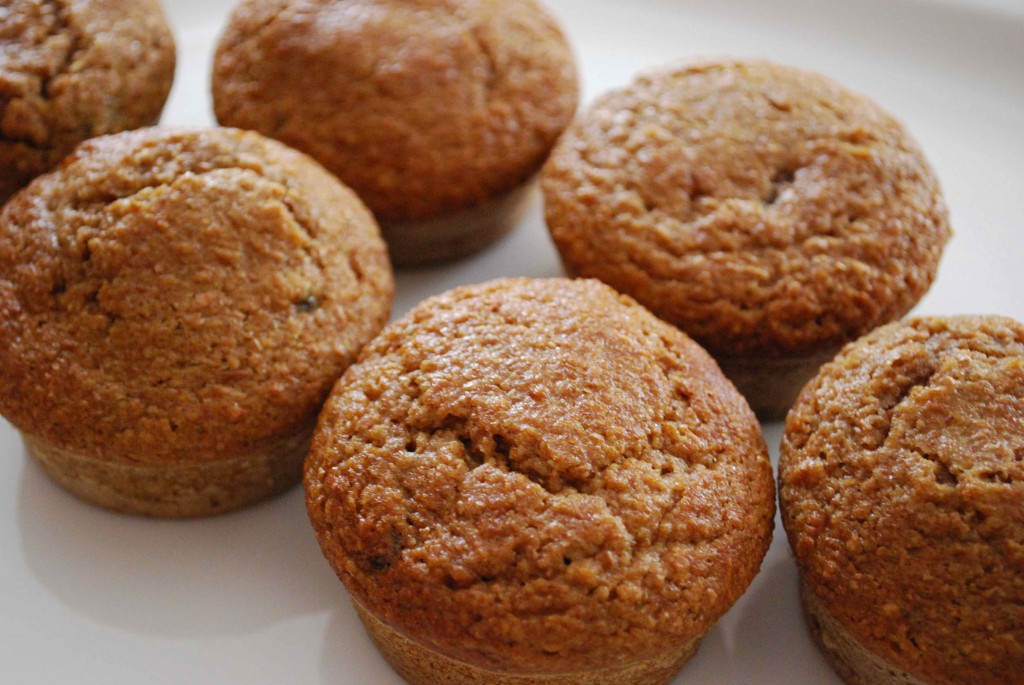 In a separate bowl, blend applesauce, milk, honey (or molasses), oil and egg.  Add mixture to dry ingredients and stir just until moistened.

Spoon mixture into greased muffin tins (or muffin cups) and bake for 15-20 minutes.  *I baked mine for 15 minutes and they turned out perfect.

Yields 12 muffins according to recipe, but I got 17 out of it.

I had two pitiful bananas dangling from their little banana hanger in my kitchen. Normally I would be wasteful and throw them away because as much as I would like to, I don’t bake on a regular basis due to the fact that I don’t need the indulgent food in my house. As I have mentioned before, the skinny gene is not a friend of my family. So, I am not one of those people who generally holds onto their ripe bananas. Well, I guess the What’s Cooking board that I frequent must be wearing off on me because instead of tossing them I was determined to find a recipe to use them in. I figured I would treat my coworkers to a Friday sweet. I searched for banana bread recipes (of course the first thing that came to mind) but most of the recipes I found called for more than two bananas. Just when I thought I was going to have to get really creative I logged onto the WC board and there just happened to be a blog update from angelashley titled Peanut Butter Banana Muffins. I checked out the recipe and to my delight it only called for two bananas, YAY! My two little bananas wouldn’t have to go to waste. It was obviously meant to be that I make these lovely little muffins. I was also itching to use my new silicone baking cups. :o)

If you aren’t a fan of super sweet things in the morning then this recipe is perfect. They have a very mild sweetness even with the streusel topping. My coworkers loved them. 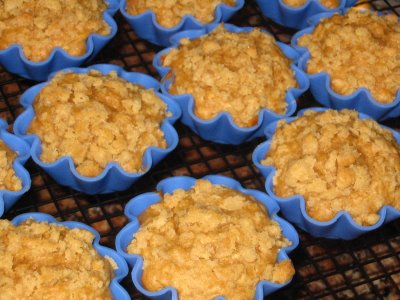 Bake in preheated oven for 18 minutes, until golden brown. Best served warm (but everyone enjoyed them room temperature as well).

Note: I actually got about 15 or 16 muffins out of the batter.